Pula is the most odd and mysterious town of Croatia. Its history powerfully affected forming culture, architecture and local traditions. There really is lot of sights here but the town itself is not that attractive and nice but relatively cold and beefy. Various nice corners look just like oases of tranquility. The town can both amuse and disappoint its visitors as there are lots of things which seem incompatible at first sight but nevertheless form the image of Pula. 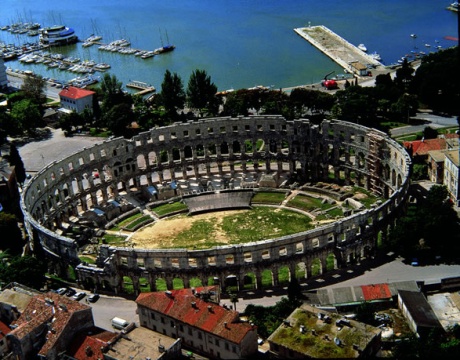 Pula was first mentioned in the legend of Argonauts in times of their journey to the Golden Fleece. Town called Polai is founded. Pula was founded by the name of «Town of asylums», the Argonauts didn’t dare go back there without the Fleece. A lot of items were excavated that prove the link between this town and ancient Greek culture. Among them were pieces of Statue of Apollo and earthenware. From 45 to 46 AD Pula was a Roman colony which provided its fast development. Later at the decision of Octavian, Pula became the Emperor’s town. Masterpieces of roman architecture, such as Temple of Augustus and the Triumphal Arch of Sergi prove that. The amphitheater (the Arena) deserves special attention. It was built in the 1st century, during the reign of Emperor Vespasian. The Arena is a very important coliseum which survived till today and remains in a very good state. Festivals are held here every year. 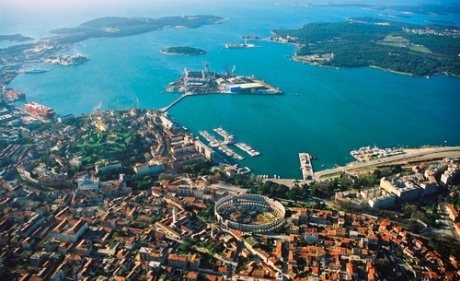 After the collapse of Roman Empire, Pula was ruled by the Venetians. During that times the town turned into a typical medieval town, the roman-gothic architecture appears here. After numerous wars, malaria and plague epidemics the Venetian period were over. Pula becomes a part of Austria, then conquered by Napoleon and becomes an Austrian town again. After losing territories in the north Italy, in 1859 the Austro-Hungarian Empire decides to make Pula the strongest naval base in the Adriatic coast. The town becomes an industrial port losing its charm and ancient brilliance.

After World War I Pula is reigned by Italy and joins Croatia only in 1947 after the World War II. 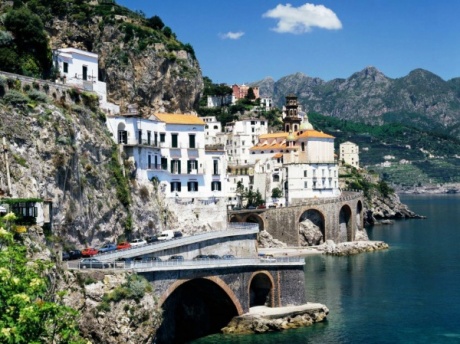 Pula is the biggest town in Istria and is located at the tail of the peninsula. Bus services connect Pula with other cities, Italy and Slovenia. Highways along the coast connect Pula with Porec, Rovin, Umag, Rieke and other towns. There is an airport near the town. The population of Pula is multinational and the majority is the Croatians. Business priorities of Pula are tourism, fishing, fish processing, shipbuilding, winemaking, construction industry and glass industry. Some famous places are located to the south from Pula. The Brijuni national park is very popular.