Dubrovnik (also called Raguza) was founded in the 17th century and is situated on a part of a rocky near the coast. Within the period starting in the 17th century this place became a big port in Eastern Adriatic coast. It is one of the most important trade and shipbuilding centers in the European market. The Republic of Dubrovnik has remained actual independence for centuries mostly due to conflicts between the neighboring countries. 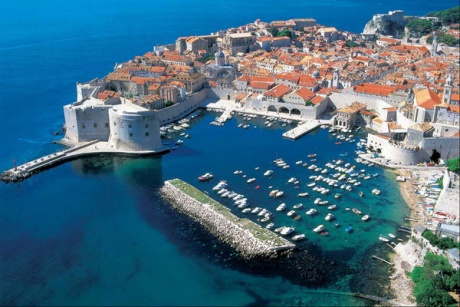 After a powerful earthquake of 1667 the major part of the town was ruined, but Dubrovnik soon managed to rebuild and turn even into a more beautiful region. In 1806 French army entered the town (through Pele Gate) and two years later the Republic of Dubrovnik comes to an end forever.

Today the image of Old Town almost has not changed even under influence of modern architecture. It is amazing that it is free from cars as the moratorium on their entering the ancient streets is in effect. The old part of Dubrovnik is ideally preserved and is circled with unique massive stone walls with towers which make it a cohesive agglomeration with buildings of the 14th – 18th centuries. A lot of galleries and museums that have preserved priceless evidence of Middle Age Croatian history are available here. 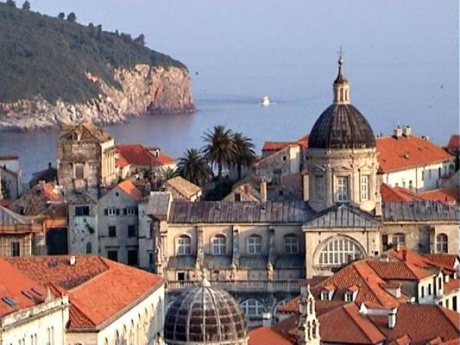 In the western part of the Old Town

You can enter the old town through Pele Gate which was constructed in the 15th-16th centuries. Behind the gate the main street of the Old Town begins which Stradun, also called Placa. Both locals and tourists love rambling here. Long time ago there was a channel here that divided the island and the continent, but it was filled up in the 13th century and the fill was tiled.

In the beginning of the street the small St, Spas Church(1520-1528) called «small stone treasure» by the locals is situated. The church is an amazing example of Dalmatian renaissance architecture. Its front is decorated with a rose-shaped oxeye. Near the church you can find the 16-sided Big Onofrio’s fountain which has become the favorite place of lovers (it was designed by Onofrio della Kava in the middle of the 15th century). 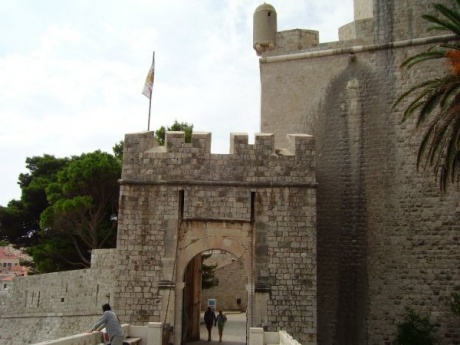 The Franciscan Monastery (the 14th century) was made famous mostly by the amazing Romano-gothic enclosed court which was built in 1317. If you want, you can visit the Monastery chemist’s store which survived till today. It is considered to be one of the oldest in Europe and is open from 9 a.m. to 6 p.m. every day.

The Stradun Str. leads you to Loggia I the Central Square of the town. Here you can see the quadrihedral Town Bell-tower (the 15th century). Near the niche in the City Watch building there is the exclusive Small Onforio della Kava’s fountain which was built in the 15th century. Today the old Town hall (neo-Gothic, built in 1882) is the building of the town government also including a theatre and a café. 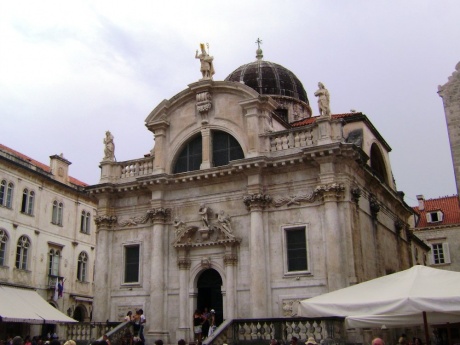 The Orlando’s Column (the protector of he town) was erected in the central part of the square in the 15th century. The Senatus consultum were announced from its stairs in old time. Behind the column you can see the baroque façade of St. Vlah Church (the 18th century). St. Vlah is the patron saint of Dubrovnik. In the sanctuary of the church you can see a gold-plated figure of Vlah made of silver. It is a unique piece of art by the Dubrovnik jewelers (the 15th century).

The Ponza Palace (also called Divona Palace) (1516-1521) is situated here, in the left part of square of Loggia. This is one of the most beautiful buildings of the town. Some time before it was a building of the customs, a mint and a school. Nowadays this building is the biggest Hall of records. Elegance of arches and Gothic windows made with fretwork fascinate the visitors the most 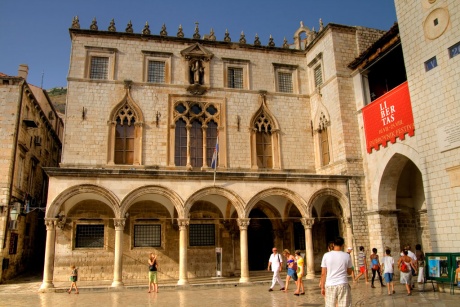 The Dominican Monastery situated further down the street is one more amazing building. It was being built from the 14th to the 16th century. This building neighbors the town wall and in the past it performed the protection function. Nowadays there is a museum in this building offering you to have a look at beautiful paintings of local artists, costly jewelry, sacred objects and items of clerical clothing. You can visit the museum from 9 a.m. to 6 p.m. every day. Just behind the monastery you can see the Ploce Gate and a drawbridge.

Through the Ploce Gate you can come up the Town walls erected in the 14th - 15th century and then you can go about 2 kilometers around the whole Old Town on these walls (from 9 a.m. to 6.30. p.m. every day).

To the Old town harbor

In the old time the harbor could only be entered through the Fort of St. John which was created in the 16th century. Now there is the Maritime Museum in its place. It is open Tuesday through Sunday from 9 a.m. to 7. p.m. and offers you to have a look at the models of historical ships, maps, weapons and navigation devices. There is a marvelous aquarium in this fort which is open Monday through Saturday from 10 a.m. to 10 p.m. If you want to enjoy swimming we recommend that you visit a small Lokrum island south-easterly from the town. During the swimming season powerboats cruise here in the Old harbor from 9 a.m. to 7 p.m. 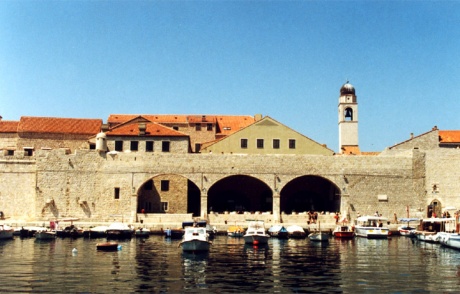 The Cathedral of the Assumption of the Virgin Mary is situated here too. It was built on the pinning of the 7th century basilica after the earthquake of 1667. New collections of relics and jewelry are on display here. The Cathedral is open from 8 a.m. to 8 p.m. Monday through Saturday and from 11 a.m. to 5.30 p.m. on Sunday. There is one more amazing building constructed during the period of prosperity of Dubrovnik – the Duke’s Palace. Long ago it functioned as a building of the town management and dukes lived in it. The duke was elected for 1-mopnth period during which he couldn’t leave the palace.

Having entered the portal you can visit the enclosed court. In summer, during the music festival, classical concerts are held here. You can visit the upper floors and enjoy the wealth of the Town museum exhibits. Lots of costly bits of furniture, decorative art and collection on antique coins are on display here. The museum is open Monday through Saturday from 9 a.m. to 6 p.m.

In the morning the market-place is ideal if you want to buy some fruit or vegetables. It is always full of buyers and farmer merchants. The monument of poet Ivan Gundulic (erected in 1893) is right in the center of the marketplace. From here you can head to the Jesuit Church of St. Ignatius (1725). The oldest bell of the town is the crown jewel of the church. 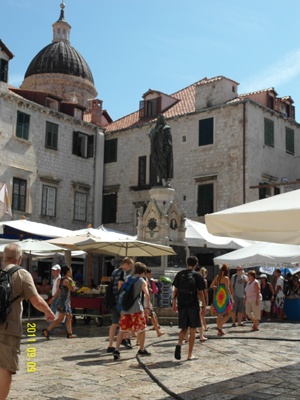 The Rupe museum is situated in the building which used to be the town granary built in 1543. . At the upper floor you can have a look at amazing exhibits of economic life and Dalmatian national costumes of the period starting from the ancient times and ending with the Middle Ages. The Museum welcomes you from 9 a.m. to 18 p.m. every day. 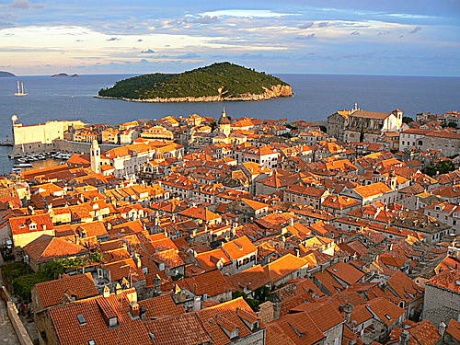