Plitvička jezera is a cascade of karst akes interconnected by 92 fountains located at the Croatian-Bosnian border in the central part of Croatia. Around this cascade in the northern-western part of Dinaric alps (eastern Lika) a unique place is located. It is the biggest national park of Croatia the main goal of which is saving flora, incomparable landscape and geological formations. In the ancient times locals unwillingly and rarely visited this place, cut the trees and hunted near the Cherna River as they considered this place to be bewitched. 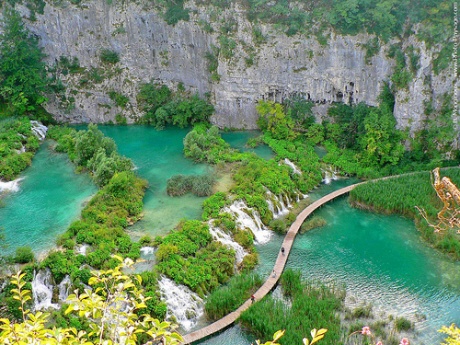 This lake region noted in the 17th century maps as the garden of Devil has the area of 29500 square hectares and now is a small paradise. Its appease atmosphere is formed by marvelous landscapes, virgin forests, fields and a few small villages. A diadem of sixteen lakes forming a kind of a ladder surrounded by a thick forest is considered to be the pearl of Croatia. The highest (636 meters above the sea level) and the second biggest lake is Lake Proscanska which is more than 37 meters deep. The lowest lake located at 503 meters above the sea level is Lake Novakovica-Brod. Both lakes strike tourists with their grandiosity and majesty. 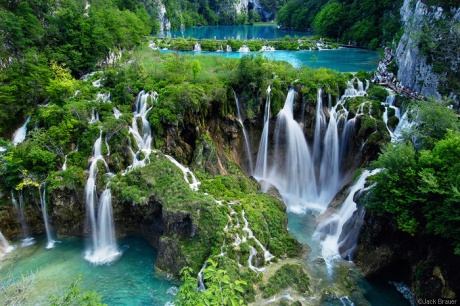 The lake chain starts with two tiny rivers – Crna and Bela which connect into River Matica on the slope of mountains and form a waterfall. New waterfalls appear here every year. Scientists say that it happens thanks to calciphiles. All mountains here are mostly formed by calcareous rocks as the water is full of diluted lime. Calciphiles form hard deposits during recession, the leafs and branches of trees when fallen into water turn into fossils which grow a couple centimeters in a year and with the passage of time block the river. But the water breaks through them and the chalky dams and form new waterfalls. Looking at Plitvic Waterfall with its powerful currents and cascades can hypnotize you. A small lake Kozjak (area of 82 square hectare and 45 meters deep) is also located in Sastavcy («junction»). 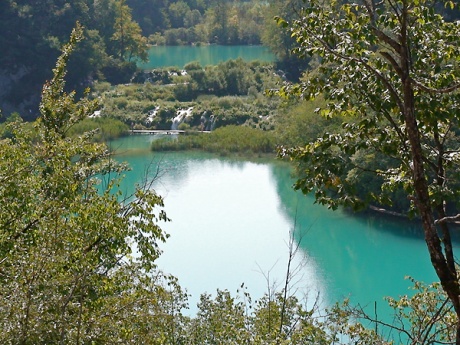 Plitvička jezera surrounded by fabulous mountain slopes covered with thick forests full of beeches and spruces where martens, squirrels, wolves and wild cats live attract the tourists by clean and transparent water full of trout and other fish. Brown bear can be seen in the park. One of the mountain groups is called Medvejak. The legend says that Plitvica will be destroyed when the last bear dies.

Tourist and excursion routes crossing wooden bridges and boarding right above the lakes and waterfalls amaze tourists with their beauty and unpredictability. The excursion program across he Pliticka region, which became a national park in 1949 and entered the World heritage of UNESCO in 1979, includes a boat tour around the lake which once «starred» in a film as a virgin Indian territory. Visitors are also offered to take a road-train ride which lets them to save their time and energy and see more sights too. 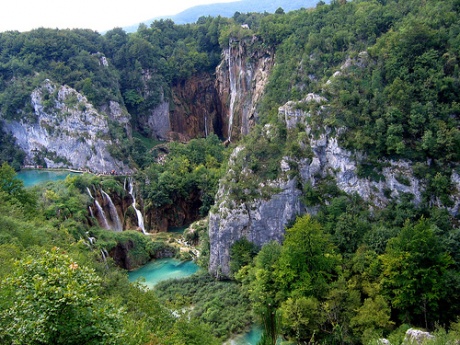 But lakes and waterfalls are not all sights of the National Park. Its main component is thirty six mysterious caves. The most famous of them are Mrcana and Golubnjaca where you can see scientific-architetural attires and get acquainted with its special cave fauna consisting of crustaceans, insects and bats.

At the end of the 19th century the Social group protecting Plitvička jezera, members of which took care of preservation of this natural monument in its unique primeval state. Building a fire, organizing picnics, walking the dogs and swimming in the lakes is still prohibited here. Cruisers only work from electric traction because all lakes are protected against pollutant gas emissions. Trying to keep the initial natural state of lakes, leafs and fallen trees are not picked out of them. Inside the territory of the National Park there is a preserved area which no one except the chasseurs can enter.