At the north-west town exit, where it nowadays interlocks with the industrial suburbs Solin, the ruins of Salona are located. Some time ago it was an administrative, religious and economical center of the province of Dalmatia in the Empire of Ancient Rome. The story goes that GaiusAureliusValerius Diocletianus, who would later be the Emperor from 284 to 305, was born here in Salona in the 3rd century. He probably was the founder of Split. Then, after he had voluntarily given up the power in 305, he decided to return to his native land and ordered to erect a tremendous palace which was also a fortress that covered a 3 hectares area. 300 years later the citizens of Salona sought the defense from attacks of the Slavs and Avars behind its huge walls.

During the following centuries the town has been expanding beyond the palace territory. Residencies of well-off citizens emerged in its outskirts during the renaissance period. A lot of famous craftsmen such as Andria Aleshi, Giorgio da Sebenico and Niccolo di Giovani Fiorentino, participated in building the town. 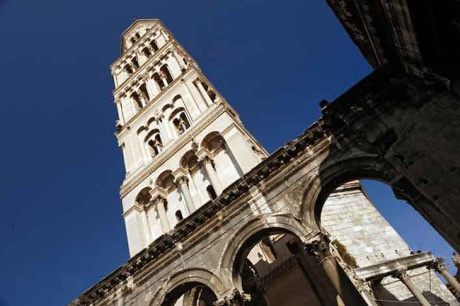 It is recommended to start exploring the town with the town harbor. Hear the ship honk reach your ears, amazing salty wind blows and auto-ferries are berthing returning from their trip to the islands. Behind the seafront the ancient walls of Diocletian Palace are located.

The southern wall used to be the marine façade of the palace. The Emperor’s chamber under which there were huge cellarage (this is where the Sea Gate leads) was located here. Nowadays you can find wall arches made of breaks and stone blocks and leaning against square columns in the cellarage. In our time these premised are loved by the local souvenir merchants. 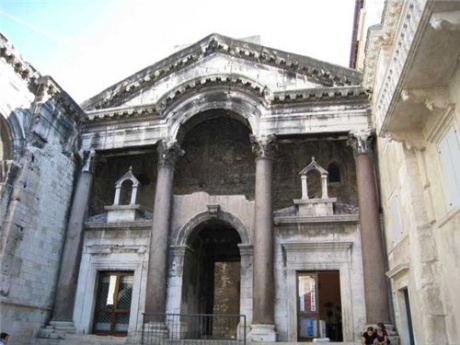 Peristil is one amazing palace building that survived till nowadays. It is a colossal rectangular hall with dimensions of 24x13 meters. Peristil has no roof or ceiling so you can see the sky above it. At the Diocletian’s time various solemn festivals and celebrations were held here. Nowadays theatrical performances are held here during the festivals. Passing Peristil tourists go to Vestibul which is a round hall which formerly led to the Emperors chamber (did not survive).

The Cathedral of St. Domnius

Visitors of the eastern part of Peristil can visit the eight-square Cathedral of St Domnius. The construction of this building was carried out in the Middle Ages and then there was a mausoleum (the tomb of Diocletian). Special attention should be paid to the carved wood gate in the Andriy Buvin which depicts 28 bible scenes. 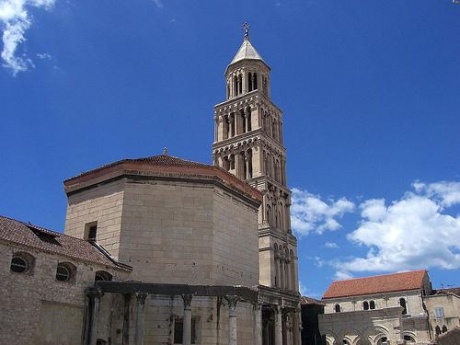 A hexagonal platform was installed on top of tall columns in the 13th century. In the 15th century Giorgio de Sebenico managed to create the St.Stash altar which is unique for its excellent embossments («The Flagellation of Christ» is one of them). A lot of historical manuscripts, pectorals and relics are kept in the vault of the cathedral. A five-storey bell-tower which is one of the most significant sights of the Dalmatian coast is located near the former Mausoleum.

From the Eastern Gate to the Iron one

The Diocletian Palace is divided into four almost equal parts that decussate by the following streets: Kardo (now called Diocletian street stretching from north to south), and Decumanus (now called Kreshimirov stree). You can enter the palace through the Gold Gate in the north, through the Silver gate in the east, and through the Iron Gate in the west. Outside the Silver Gate a big town marketplace is located where you can buy various items (wool, leather, silver, wood). The north-east part also contains the Papalac Palace which will surely strike you with its beauty. Giorgio de Sebenico was the architect of the palace in the 15th century. The Papaliches were the family that owned first local antiquities. In particular the Town Museum was founded here. You can have a look at its exposition on Tuesday through Friday from 9 a.m. to 9 p.m. and from 10 a.m. to 1 p.m. on weekends. 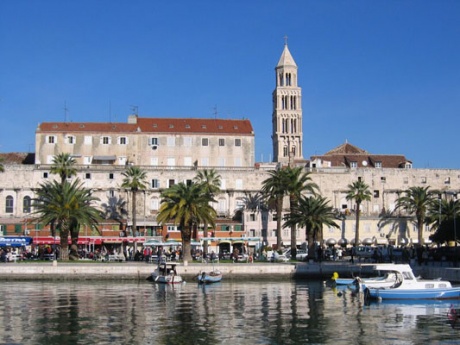 A small ancient Roman temple of Jupiter, which is a rectangular building with double-pitch roof and attractive carving and frieze on the cornice, is situated opposite to the Cindro Palace. The Kreshimir street ends with the Iron Gate which leads you to the People’s Square and out of the Diocletioan palace.

In the Old Town

The most beautiful building in the People’s Square is the old town hall. There are three 15th century pointed arches in it. Today this building is used as the Ethnographic museum which is open from 7 a.m. to 3 p.m. Visitors can have a look at various collections of costumes, ceramics, fabric and the everyday objects.

Not far from the Diocletian Palace green parks and squares are spread. Near the 16th century bell-tower of Benedictian Monastery you can see an amazing 8-meter tall bronze statue of Bishop Grgur Ninske who fought for preservation of Croatian language in the 10th century. Local legends say that a man who has touched the big toe of the statue will always be lucky.

Big walls were built around the expanding town in the 15th century. You can see the ruins near the Square of the Radic Brothers. Also in this square you can see the baroque Milesha Palace – the best in Split, the Marulic Staue is situated just in front of it (Marulic was a famous humanist and is often called the founder of Croatian literature)/ The statue was created by Ivan Mestrovic. Westly from Split, in what used to be Mestrovic’s summer residence, there is a great gallery of his works which is open from 10 a.m. to 7 p.m. every day.

To the north from the center of Split the Archeoligical Museum is located. Here you can see some antique finds, mostly discovered in Salona. The mosaics, sarcophaguses, ceramics and bijouterie deserve special attention. The Museum is open Tuesday through Saturday from 9 a.m. to 7 p.m., and from 10 a.m. to 6 p.m. on Sunday. Also we recommend that you visit Salona. It takes only about 15 minutes to get to its ruins from the center of Split. You can get there by bus. You can also have a look at ruins of a huge amphitheater which was supposed to hold 18 thousand people. Ruins of temples, villas, early-Christian basilicas and necropolises are preserved here. 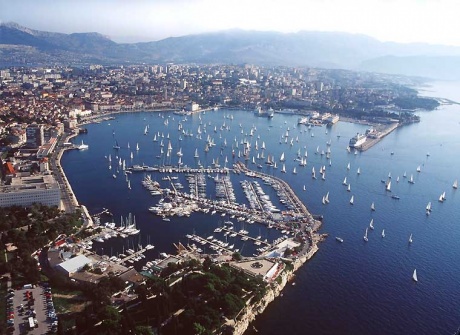